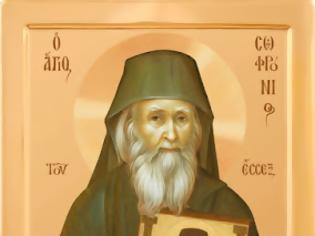 ...continued from part four.8. On Prayer

It is divided into three parts. In the first part, a theological analysis of prayer is made, that is, "Prayer as an Endless Creation", "Prayer as the Way to Knowledge", "Prayer Overcomes the Impasse of Tragedy", regarding prayer made with effort in which man is regenerated, for eternity. In the second part there is a special discourse about the Prayer of Jesus, the well-known "Lord Jesus Christ, Son of God, have mercy on me" and specifically called "The Jesus Prayer", "The Jesus Prayer: Method", "The Jesus Prayer for All Times and Occasions". The third part talks about the "Spiritual Life" and "The Role of the Father-Confessor". At the end are published the morning prayer "When Awakening From Sleep", and the "liturgical prayers" compiled by Saint Sophrony to be read in the Divine Liturgy after the Gospel and before the beginning of the Liturgy of the Faithful, to prepare those who are in attendance for their participation in the Divine Liturgy and the Divine Communion of the Body and Blood of Christ. Also, the prayers "For the Reposed", "For the Reposed Priests" and "Prayer for Unity" are also published.