The Philanthropy of Saint Philothei the Athenian 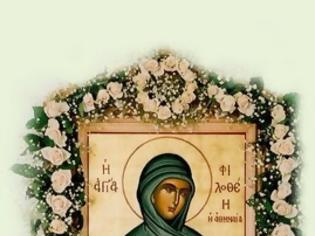 Saint Philothei was born in Athens in 1522 to an illustrious family. Against her will, she was married to a man who proved to be most cruel.

When he died three years later, the Saint took up the monastic life and established a convent, in which she became a true mother to her disciples. Many women enslaved and abused by the Muslim Turks also ran to her for refuge. Because of this, the Turkish rulers became enraged and came to her convent, dragged her by force out of the church, and beat her cruelly. After a few days, she reposed, giving thanks to God for all things. This came to pass in the year 1589. She was renowned for her almsgiving, and with Saints Hierotheus and Dionysius the Areopagite is considered a patron of the city of Athens.

From a Greek biography of the Saint:

In addition to her dedication to a virtuous life, practicing philanthropy by offering protection, giving alms and ministering to the poor and sick, providing Christian education by teaching everyone ecclesiastical letters and liturgical knowledge, the holy woman contributed the following:

First, she founded schools for the children of the Athenians, to open their eyes to the tradition and renown of their ancestors. 'Lay hold of instruction, lest at any time the Lord be angry' (Ps. 2:12). Philothei brought this scriptural quotation to reality. Within her flickered the hope of the rebirth of the Byzantine Empire and...the early deliverance from the bestial yoke of the conquerors.

Second, Philothei aimed at protecting the daughters of Athens from the disgrace of conversion to Islam.... The danger of being subjected to conversion existed not only for the noble daughters who were forcibly abducted by the Turks because of their beauty and grace, but also for the simple ones, the peasant girls, who were forced to work in Turkish homes and farms in order to sustain themselves. Pressure, necessity and ignorance (the great deceiver) were causes in forcing the maidens into submission.

However, Philothei, with her convent of virgins (Παρθενώνα), her schools, her convent's metochia, and family ties, was capable of either strengthening those under duress or sending them away and hiding them. This was done until their consciences recovered or the danger subsided; and until fear was replaced by a spirit of faith and sacrifice for the sake of the Christian Faith.

N.B. Tomadakis, The Life and Service of Saint Philothei, University of Athens.

Apolytikion in the Plagal of the First Tone

The famed city of Athens doth honour Philothei, the righteous Martyr, whose relics it now revereth with joy; for while living in sobriety and holiness, she hath exchanged all earthly things for the everlasting life through great contests as a Martyr; and she entreateth the Saviour to grant His mercy unto all of us.

Kontakion in the Third Tone

We all honour Philothei with jubilation of spirit, as this day we rev'rently worship her ven'rable relics. For she lived her whole life working kindness and mercy; and the righteous one, receiving a martyr's ending, is deemed worthy to entreat God that all be granted eternal life with the Saints.

Procession with the incorrupt relics of St. Philothei in 2007

Church of St. Andrew, founded by St. Philothei after a vision

The Church of Saint Nicholas of Ichthys in Psari, Corinth

Saint Romanos of Cilicia the Wonderworker