Synaxarion of Saint Panteleimon the Great Martyr and Unmercenary 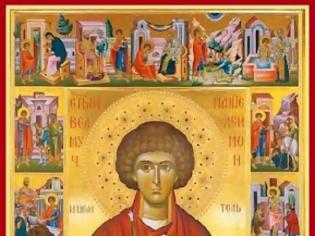 On the twenty-seventh of this month [July], we commemorate the Holy Glorious Great Martyr and Healer Panteleimon.

Milk mixed with blood came from your skull, O Martyr,

For whom Christ shed the mixture with water.

On the twenty-seventh Panteleimon obtained his portion by the sword.

This Saint lived during the reign of Emperor Maximian (286-305), and was from the city of Nicomedia. He was the son of a Greek pagan named Eustorgius, while his mother came from a family of Christians, and her name was Euboula. He went on to learn the art of medicine for the body, from someone named Euphrosynos, who had great fame and glory, and appears to have reached the pinnacle of medicine. Meanwhile he learned the medicine of the soul according to Christ from Saint Hermolaos, a Priest of the Church in Nicomedia, and is commemorated on the twenty-sixth of this month. Through this medicine according to Christ, the Saint raised a child, who was bit by a viper and fell dead, merely by the Saint calling upon the name of Christ. He had been baptized by the aforementioned Saint Hermolaos, and was led by him to faith in Christ.

Sickness and Pain Are A Gift of God: Saint Panteleimon Comes to the Aid of Monk Daniel
ΠΡΟΗΓΟΥΜΕΝΑ ΑΡΘΡΑ