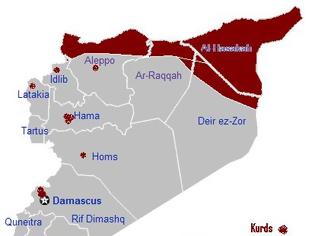 Last week, after 30 years of estrangement, Secretary-General of the Kurdish Democratic Union Party (PYD) Saleh Muslim Mohammad visited Turkey for two days to discuss a political quarrel about the formation of a Kurdish entity in northern Syria and a military quarrel regarding Jabhat al-Nusra, whose fighters, numbering in the hundreds, are disembarking Turkish trains in Ras al-Ain to fight the PYD in Syria.

Turkish Prime Minister Recep Tayyip Erdogan received Mohammad, Abdullah Ocalan’s companion, with Ottoman contempt, signaled by the announcement that Mohammad will “meet with Turkish intelligence chief Hakan Fidan, who will inform [Mohammad] that there won’t be Kurdish autonomy in northern Syria.” But in fact, Muslim didn’t meet with a single Turkish security official. He met with senior political leaders at the Turkish Foreign Ministry and will return to Istanbul soon.

Several developments prompted the Turks to meet Ocalan’s Syrian companion. One of those developments was the failure of Turkish strategy to isolate the main Kurdish force in the Syrian opposition and prevent it from joining the Syrian National Council and the Syrian National Coalition. Another development was the National Coalition’s failure to find a credible Kurdish representative. So the Turks decided to include the PYD in their regional strategy. Efforts to militarily weaken the PYD have failed. The group came out victorious in Ras al-Ain and their Kurdish Popular Protection Units have gained control of border crossings. Meanwhile, there is talk of a Kurdish autonomous entity in northern Syria. This nascent entity is not facing serious opposition, which has turned the Kurds into an important regional factor.

Following is As-Safir’s interview with Saleh Muslim Mohammad on the occasion of his visit to Turkey and the recent developments in northern Syria.

As-Safir:  What are the changes that made it possible for you to visit Turkey after this long estrangement?

Mohammad:  The Turks have a phobia of the Kurdish cause. During the 20th century, they fought it, but today, Turkey is looking at the Kurdish issue differently and has recognized it. Turkey is trying to resolve the problem between the [Turkish] Kurds and the Turkish state. This is affecting other Kurds. So Turkey wants to establish good relations with all the Kurds. They have excellent trade and economic relations with the Kurds in the south and they are on the way to solving their problems with the Kurds in the north. They have started accepting the Kurds of western Kurdistan.

As-Safir:  Why did they choose this moment to engage in dialogue with you? Is the decision part of the Turkish agreement with Ocalan?

Mohammad:  Turkey was forced to do that because of the situation in the Middle East. Turkey will either be divided or will find a solution with its Kurds, and perhaps with the Kurds in the region nearby. Why not? I was not invited in my personal capacity [but in my official capacity]. [The Turkish invitation] was a good move to cement good relations, facilitate understanding and reduce hostility. Our comrades in the Syrian National Coordination Committee (NCC) are aware of the Turkish pressure to remove the PYD from the NCC. But today, the situation has reversed. The Turks want the PYD to join the Syrian National Coalition so that the PYD becomes a hub in the Syrian opposition. [The Turks] want the PYD to lead the [Syrian] opposition. This is a major change.

As-Safir:  How are they encouraging you to play a bigger role in the opposition? Will they accept your conditions and the autonomy project in the north while at the same time they are fighting you through Jabhat al-Nusra?

Mohammad:  This is where the problem lies. We don’t know who gives the orders inside these groups. Is it the Free Syrian Army (FSA) or Jabhat al-Nusra?

As-Safir:  Have you discussed that issue with the Turks? How can you join the National Coalition while some of the coalition’s major factions — Brigade 313, Platoon 11 and Ahrar al-Raqqa — are battling the Kurdish Popular Protection Units?

Mohammad:  No. We didn’t discuss that with the Turks. This is the problem. We have said that we are ready for an understanding with the secular FSA, which is fighting for democracy. But the FSA, as far as we know, is a grouping of small factions. The actual leaders [of the Syria military opposition] are Salafist groups: Jabhat al-Nusra, Ghuraba al-Sham, Ahfad al-Rasul, Ahrar al-Sham and others. We will never deal with those.

As-Safir:  The Turks have tightened the siege on you economically and politically. They have shut the National Coalition’s doors in your face. They closed the border crossings of the Kurdish areas. They prevented relief aid from crossing [into Kurdish areas]. Then they put Jabhat al-Nusra in your face. How does the picture look after your visit to Turkey?

Mohammad:  There is a radical change in the Turkish position. We hope that this is true. We may meet again with the Turks to follow up on the agreements: providing humanitarian, food, and medical assistance; opening the Derbassiyeh crossing; and the Turkish promise to help us get rid of Jabhat al-Nusra.

Mohammad:  [The Turks] may pressure the FSA to keep [Jabhat al-Nusra] away from our areas.

As-Safir:  But Jabhat al-Nusra and others are coming from Turkey.

Mohammad:  This is the problem. You cannot say to a senior leader that he is a liar for supporting [Jabhat al-Nusra] while he tells you that he’s not supporting them. The information coming from our comrades are clear [that Turkey is supporting Jabhat al-Nusra].

As-Safir:  What about the autonomy project?

Mohammad:  It is about a transitional civil administration. Civil self-rule is the eventual goal.

As-Safir:  But you talked about autonomy.

Mohammad:  There was a misunderstanding. We are talking about a transitional civilian administration that will emerge from local elections within six months. Then will come a parliament, which will be part of the Syrian solution. The Turks didn’t object when I explained to them our project. They understood our position. They had misunderstood [what we said] and thought that a de facto government and autonomous region [has been established]. But I explained to them that it is a transitional civilian administration for western Kurdistan, which includes Arabs, Kurds and Christians.

As-Safir:  You have downgraded the project to a “local” level. It used to be a “national” project, as attested by published documents, especially the draft constitution.

Mohammad:  Our current project is a local administration at the municipal level. Autonomy is a future project that will be part of the overall solution for Syria and will be discussed in Geneva or elsewhere. We will start with a transitional civil administration because a comprehensive Syrian solution may be delayed. The draft constitution that has been circulating is just a study of what the future constitution could be. The [draft constitution] was produced by a committee based on our request. We were not the ones who leaked it.

As-Safir:  Is the constitution [the basis for a future state]?

Mohammad:  Yes, at a subsequent stage.

As-Safir:  Could the Turkish army interfere in the Kurdish areas of Syria if your autonomy project makes progress?

Mohammad:  No, definitely not. The Turks will think a thousand times before doing that. They can see the resistance we are conducting in the region. They can also see that we are the only ones fiercely fighting these monsters coming from the Middle Ages. Our resistance will be fierce.

As-Safir:  About the Geneva conference, has the transitional administration changed the Kurds’ status in any future political negotiations on Syria? Will the Kurdish issue be [discussed] independently?

Mohammad:  That status should be changed. The Kurdish issue should naturally be independent from the other issues. [The Kurds] have a different vision as to what the solution will be. In 40 days, we will have a transitional administration, which will give the Kurdish Supreme Committee a broader framework and more legitimacy.

As-Safir:  Will it have a separate delegation within the opposition?

Mohammad:  It will not be the cause of the dispersion of the opposition. If we agree on a joint delegation, we will go together. But we will appoint someone in the Kurdish Supreme Committee who will represent us in the negotiations. If the opposition factions in the SNC and the Nation Coalition do not agree on a united delegation, then it would be better if we go with a separate delegation. We believe that they will not unite.

As-Safir:  Will the opposition agree that the Kurdish question be discussed separately in the negotiations? Especially the National Coalition, which has refused?

Mohammad:  We can turn the tables on everyone as forces that exist on the ground. Ours is a special case.

As-Safir:  Is that an extension of the ongoing political struggle with the National Coalition?

Prayer of St. Ephrem the Syrian to the Most Holy Spirit

Syrian and Russian aviation landing and taking off from Deirezzor military airport...