Austerity in Europe: what does it mean for ordinary people? 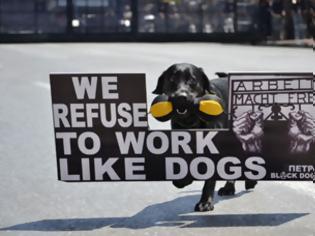 Austerity has been the main prescription across Europe for dealing with the continent's nearly three-year-old debt crisis, brought on by too much government spending. But what does it mean for the average European? Imagine paying sales tax of 23% or more. Or having your wages cut by 15%. Or, if you're in Ireland, both. Austerity comes in many forms: higher taxes, fewer state benefits, more job cuts, working longer until retirement, you name it.

Here's a look at some of Europe's austerity pain:

A protest dog during the May Day demonstrations in Athens, Greece Photograph: Nikolas Georgiou/Demotix/Corbis

Greece, one of three eurozone nations to need an international bailout, has cut spending on just about everything it can – public sector salaries, pensions, education, health care and defense. As a result, unemployment has soared to over 21%, fuelling social unrest that has sometimes turned deadly. In the last two years, riots have erupted frequently and the country's near-daily strikes and demonstrations have shut down schools, airports, train stations, ferries and harmed medical services.

A strike picket from General Confederation of the Portuguese workers (CGTP) during the general strike at Sao Bento station in Porto, nothern of Portugal, 22 March 2012. Photograph: Jose Coelho/EPA

Portugal is paying its bills only because of an international rescue loan. But the effect of lower government spending has been brutal: the economy is expected to contract 3.4% this year after a double-dip recession last year. Unemployment has climbed to a record 15%. New labour laws have made it easier for employers to hire and fire workers and change their working hours. Rent controls have been scrapped and state energy companies have been sold off.

Ireland, the third European nation on rescue loans, has already seen five austerity budgets since 2008. It has been forced to raise taxes and slash spending for years – and that won't stop until at least 2015. The sales tax is now up to a whopping 23% and middle-class wages have been cut around 15%. Residents face higher taxes on incomes, cars, homes and fuel, while the nearly 15% who are unemployed have seen lower welfare and other benefit payments. Ireland has also cut the number of civil servants.

The government has raised income and property taxes, cut spending on healthcare and education and made it easier for companies to fire workers. Coming on the heels of a real estate market implosion, the austerity measures have hit Spaniards hard. Unemployment is now around 25%, a record in the 17-nation eurozone, while about half of its young people have no jobs. The country's sales tax has already been increased to 18% and experts don't rule out another rise.

Over fierce protests, the government has increased the retirement age from 60 to 62, raised the sales tax from 5.5 to 7% on non-essential products, cut tax breaks to the wealthy and corporations, and cut regional and local government budgets. For the next two years, two state workers have to retire before one is replaced.

Austerity measures have sent Italian unemployment up to 9.8% and put the country in a recession that is expected to shrink its economy 1.2% this year. In addition, prime minister Mario Monti is trying to change laws to make it easier to fire workers. Amid the budget cuts, Rome dropped its bid for the 2020 Olympics after the government said it could not back its estimated €9.58bn cost, and an art museum near Naples burned paintings to protest against the lack of culture funding.

Umbrella sales have surged as the economy remains under the weather. Photograph: Matt Dunham/AP

Britain's coalition government is making spending cuts of £103bn through 2017, cuts that have sent the country into a double-dip recession. University tuition costs have soared, provoking violent protests. Harsh spending cuts have slashed government jobs by the thousands and cut funding to police. Unions have threatened to strike and disrupt the upcoming London Olympics to oppose the sharp austerity cuts.
youpayyourcrisis
ΦΩΤΟΓΡΑΦΙΕΣ