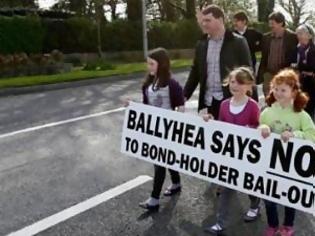 Every Sunday, after mass, the citizens of Ballyhea in southern Ireland march silently from one end of their tiny village to the other. Their protest is against the rescue of the country’s banks, which crashed after the Irish property bubble collapsed in 2008. The billions needed to keep these banks afloat, all at the taxpayer’s expense, eventually led the Irish government to seek the €85 billion EU/ECB/IMF bailout of 2010.

66 weeks into a weekly march in a country wracked by austerity budgets, mass unemployment and emigration, their anger took on an international dimension as 15 amongst them flew to Frankfurt with a letter for Mario Draghi, chief of the European Central Bank. According to the Irish Examiner –

The long white document, stuck with blu-tack to the glass doors of the soaring office block that is the European Central Bank, greeted the mandarins of the euro when they arrived for work.

Like Martin Luther’s Theses nailed to the door of the Church in Wittenberg almost 500 years ago, the Ballyhea protesters hope their statement will bring about a reformation, too.

The ECB is to blame for our soaring bank debt. The ECB has been abusing its financial muscle and forcing a weak Irish government to assume for the Irish people a debt burden that is not ours.

An Irish village says no to the banks

The invitation to the first march came on an A4 sheet, eight months ago, and it was the essence of civility. "Short, sharp, silent," it said, "No placard, no chant." Those who felt angry about what was happening should gather in the church car park and march to the speed limit sign on the edge of the village. No speech-making. "Bring only your anger."

And, this morning in the north Cork village of Ballyhea, after the second Mass, the 38th weekly march was scheduled to take place. A 10-minute walk from St Mary's car park to the speed limit sign on the edge of the village, and back. Over the months, the march has acquired a banner: "Ballyhea Says No! To Bond-Holder Bail-Out." A small upsurge of spirit in a frightened, diffident country.

It began with a local man, Diarmuid O'Flynn, a sports journalist with the Irish Examiner. He wrote to TDs, protesting about the bailout of bondholders, and got form letters in reply. Last March, O'Flynn rang around friends and relatives. A dozen people turned up in the church car park, and they had their quiet, dignified march, and the rest of us didn't notice.

O'Flynn saw the bailout of bondholders as central to what has been done to the country. Tens of billions of private business debts, transferred to the citizens, breaking the State's ability to borrow at sustainable levels of interest. He reckons the total cost of bailing out the bondholders, with interest over the years to come, will be a hundred billion.

Over the months, the march through the tiny village grew to around 70, sometimes slipping back. It's a strong GAA village, quiet, conservative, unused to standing out from the crowd. If the under-14s need a lift to a match, and a cheer from the sidelines, if farmers are especially busy, the ranks of the march become thinner. But month after month, the village has continued to bear witness to the madness.

Hopes that the protest would spread were unfulfilled. There was activity in Fermoy for a while, but it petered out. A march to Dublin was met with indifference. O'Flynn sees the sense in protests on specific issues -- the A&E scandal, the tuition fees -- or in the Occupy movement. But, in talking to individual protesters, aware of the huge transfer of wealth, and what that does to the State's finances, he has been moved to ruminate. "Lads, can you not make the connection?"

O'Flynn set up a blog, bondwatchireland.blogspot.com. There, he documents each payment coming up, identifying which bank took on that debt. He gives the total for the month, the total for the following month, and states whether the debt is secured or unsecured.

Tomorrow, as Bondwatch Ireland will tell you, we'll generously pay out another €11,280,000 to unsecured bondholders who gambled on Irish Life & Permanent. A mere morsel compared to what's coming. A fortnight later, we'll pay €43,275,094 that some reckless gambler bet on Bank of Ireland's investment prowess. Of the dozen payments we'll make before the end of the year, all but one is unsecured -- losing bets that capitalism says should be borne by the failed, reckless gamblers. But that the ECB instructs the citizens to pay, though we never knew there was ever any such bet.

The Billion Dollar Bond we were recently forced to pay off to Anglo's unsecured bondholders caused a rise in national anger, but O'Flynn points out that next month alone we'll be forced to pay out more than that. And in January we have to shell out about three billion.

And throughout this period, the air will be filled with debate about the smallest aspects of the latest austerity budget. There will be talk of the State's legitimate debts, about the need to keep money in the ATMs, but the connection to the illegitimate extortion, the unending seepage of billions to reckless private gamblers, will remain unremarked. Except in such small acts of resistance as that in Ballyhea.

The marches are tiny, isolated, perhaps even futile -- but, this is an historic period, in which smaller nations are browbeaten and unnerved, while great forces struggle to protect their wealth. Small acts of resistance are about struggle, but they're also about dignity, morality, principle -- and keeping a flame alive.