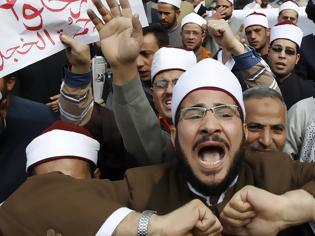 Imams shout as they demand that Religious Affairs (Awqaf) Minister Hamdy Zaqzouq maintain an Islamic identity in a post-Mubarak Egypt by making Islam the main source of law, in front of the ministry in Cairo, March 1, 2011. (photo by REUTERS/Amr Abdallah Dalsh)

Egyptian Islamist groups have called for a million-man march on Friday to defend Shariah, calling for the ruling Muslim Brotherhood to "return to God" because it has strayed from its focus on implementing Islamic law, Al-Khaleej reports.

The call for the march, which would start from several mosques in Cairo and other provinces, was made following a meeting of representatives from Islamist forces yesterday [Nov. 6]. The meeting was attended by the Building and Development Party alongside a variety of movements, including Samidoun, Students of Shariah, Hazimoun, Together to Support Shariah and the Bearded Officers coalitions.

Tariq al-Zamer, a leader of the Building and Development Party, said that the million-man march is designed to deliver a message that [not implementing] Shariah law is a red line, and getting around this implementation cannot be allowed. The march represents a call made to all Islamic forces to defend their Shariah. He asserted that the coalition “Defending Shariah Law,” which consists of 16 political parties and movements, formed a delegation to meet with members of the Constituent Assembly tasked with drafting the constitution. The meetings’ objective is to stress the need that Article 2 stipulate that Islamic Shariah law is the main source of legislation and the addition of a new article stipulating that any of the present constitutional provisions cannot be interpreted in a way that contradicts Shariah law.

On the other hand, the Islamist Gamaa Islamiya group and its political wing the Development and Construction Party warned of what they described as plans of the former regime’s remnants to abort the Jan. 25 revolution, “against a backdrop of attempts to reproduce this regime.” In a statement issued yesterday [Nov. 6], the group stressed the need to protect Egypt from corruption, for the general attorney to resign, reprisal for martyrs, to combat corruption and purify the country of corrupt individuals. The group called upon the Egyptian people to take part in the organized events in order to confront “the old regime’s movements” — as the group described them — and to join the coalition “Defending Shariah Law” in public events in Tahrir square in downtown Cairo on Friday [Nov. 9].

Is The March 18th Geomagnetic Storm Going To Wipe Out The Power Grid?