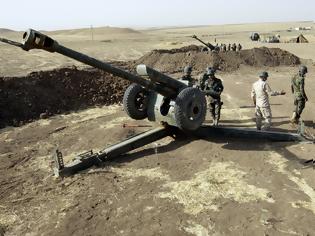 Kurdish Peshmerga troops prepare 122-mm howitzers during a deployment in the area near the northern Iraqi border with Syria, which lies in an area disputed by Baghdad and the Kurdish region of Ninawa province, August 6, 2012. (photo by REUTERS/Azad Lashkari )

A senior official at the Ministry of Peshmerga in Iraq’s Kurdistan region has called the demand of Iraqi Prime Minister Nouri al-Maliki to place the Peshmerga forces under the jurisdiction of the federal government an “illusion.” He vowed to make an official response in the next week to the accusations by Maliki.

Senior Kurdish officials have rejected suggestions that the Peshmerga militia should be placed under Baghdad’s jurisdiction. Bassem Francis and Mohammad al-Tamimi report that Kurdish authorities have promised to confront central security services if they enter the Kurdistan region.

The Kurds: Maliki ‘Delusional’ by Demanding the Inclusion of 'Peshmerga' Under His Command

Meanwhile, a Kurdish lawmaker accused the prime minister of obstructing the ongoing negotiations between Baghdad and Erbil.

In an interview with Al Sumaria TV on Monday evening [Nov. 5], Maliki declared his willingness to release funding for the Peshmerga forces if they place themselves under the jurisdiction of the federal authorities, since the constitution prohibits the financing of the Peshmerga, which fall under the jurisdiction of the Kurdistan Regional Government (KRG).

He accused the KRG of “violating the constitution by controlling the weapons left behind by the former Iraqi army, including tanks, artillery and rocket launchers, while the other federal [entities] are getting armed with light weapons.”

He revealed that he has “evidence supported by figures and copies [of transactions] belonging to the persons who [sign] contracts and buy weapons in the region.”

He said that the army “is more [entitled] than the Turkish troops to have a presence [in Iraq’s Kurdish region].”

He wondered about “the reasons behind the silence over the continued presence of Turkish troops in the al-Amadiyah and Bamarni bases since 1995 until today, while these bases are equipped with tanks, armored vehicles and aircraft, and convoys enter and exit them amid complete silence.”

He warned the Peshmerga against “committing a mistake by attacking the Iraqi army.”

Spokesman for the Ministry of Peshmerga Lt. Gen. Jabbar Yawar told Al-Hayat that the ministry “will hold a press conference next week to provide clarifications on Maliki’s recent statements.”

Deputy Minister of Peshmerga Anwar Haji Osman told Nawkho news agency, which is affiliated with the KRG Ministry of Interior, that “demanding placing the Peshmerga under the control of the Iraqi army is an illusion and pure fantasy.”

The Iraqi government has refused to include the Peshmerga budget in the 2013 federal budget considering that it is not part of the Iraqi defense system. This happened despite the negotiations conducted by two Kurdish delegations — one partisan and the other governmental — with the Maliki government last month.

Chuan Mohammad Taha, a member of the Security and Defense Committee in the Iraqi parliament representing the Kurdistan Alliance, told Al-Hayat that “the negotiation phase requires wisdom and avoiding escalation. Unfortunately, Maliki's remarks are seen as escalatory with the aim of obstructing the negotiations.”

He added: “As for the deployment of the Iraqi army, it is normal provided that the army’s loyalty is to the nation, not a person or particular faction. We have remarks on the mentality of managing the defense system in light of the loss of balance within the army and involving it in the political conflicts.”

With regard to the Turkish military presence in the region, Taha said that “this presence is inherited according to an agreement between Ankara and the former regime, but what surprises us is why they are raising the issue now and did not discuss it with the Turkish officials during their visits to Baghdad.”

He noted that the Peshmerga forces “possess old weapons, and the Iraqi government is evading the responsibility of arming these forces, which have the right [to armament] according to a constitutional article. We seek to include the Peshmerga in the defense system in terms of armament, rehabilitation and management, but have it under the command of the General Commander of Armed Forces and the Kurdistan region’s presidency.”

Nawshirwan Mustafa, leader of the Kurdish opposition Movement for Change, said that the objective of his visit to the province of Kirkuk yesterday [Nov. 6] was to support the decisions of the local government. He called for distancing the military from political disputes.

Mustafa said in a press conference that his movement supports the province of Kirkuk, its management and components through their representatives in the Iraqi parliament and the Iraqi Kurdistan parliament.

Kirkuk Governor Necmettin Omar Karim reiterated his opposition to the “formation of the Tigris Operations Command” in Kirkuk as a result of Maliki’s accusation to him that he breached the constitution.

The local administration announced its refusal to cooperate with the Tigris Operations Command following the prime minister's decision to assign to it the security files in the provinces of Kirkuk, Diyala and Salahuddin. Also, the Ministry of Peshmerga threatened to confront it if it enters the Kurdistan region.

Kirkuk is witnessing political and ethnic differences as a result of the Kurds’ demand for the implemention of Article 140 of the constitution, which calls for the provision of financial compensation to the Arabs who were recruited in the 1980s, returning the expelled Kurds after providing them with financial compensation and holding a referendum on appending Kirkuk to the Kurdistan region in the future.