Turkey And The Chechens 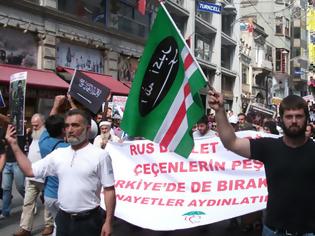 There is a substantial Chechen exile community in Turkey, which is particularly strong in Istanbul, and millions of Turks also trace their ancestry to the Caucasus. During the Russian military campaigns against Chechen rebels in the last few years, there have been persistent allegations from Russia that Turkish organisations have offered financial and material support to the independence movement.

The Turkish and Russian governments recently signed an agreement for closer co-operation against militant groups, and the authorities in Ankara have always insisted that there is no official support for the rebel campaign. But Chechen fighters have been treated in Turkish hospitals, and the ruthlessness of the Russian military has generated considerable sympathy among ordinary Turks for their Chechen brethren. Turkey has also been dragged unwillingly into several previous hijackings involving the Chechen issue. The most famous occurred in 1996, when a group of pro-Chechen gunmen seized control of a passenger ferry off Turkey's northern Black Sea coast. More than 200 people were held hostage for several days by a gang, which included both Chechens and Turks. The hijackers were eventually imprisoned but all of them later escaped amid strong suspicions that they were allowed to go free.

THE CHECHEN DIASPORA IN TURKEY

The Chechen Diaspora is still taking shape. The devastating war in Chechnya that has lasted for ten years has already produced a large number of refugees. Most of them, of course, moved to Russia, while others chose to escape the old Empire and preferred to settle in Georgia, Azerbaijan and Turkey, trying to reach Western Europe from those countries. The second war in Chechnya has been going on for six years, leaving refugees without much hope of returning home anytime soon. They have started organizing themselves, trying to build the basis for a Diaspora, whose main task, like many other Diasporas around the world, is to support the resistance against the enemy. Turkey may be the best place for those seeking to continue the fight in Chechnya from abroad. During the first Chechen war (1994-1996), Turkish authorities played host to exiled Chechen warlords and allowed several Turkish mayors who were members of the Prosperity Party, an Islamic party, to provide medical aid and general support for the Chechen guerrillas. Within Turkish political society there even emerged a coalition between hardcore Islamists and nationalists who favored Turkish military intervention in Chechnya.

Thus, since the beginning of the second Chechen war in 1999, Turkey has represented a perfect safe haven for Chechen refugees, among them fighters who think that the war should be also supported from abroad and who look for international backing. Some 3,000 to 4,000 Chechens arrived in Turkey between 1999 and 2001. Since then, however, the number has declined. There are now probably only 1,500 Chechens left in the country. While some returned to Chechnya, the vast majority fled to Europe through Bulgaria or Ukraine. The situation for Chechen refugees in Turkey has changed. Political forces have largely given up the Chechen issue. The September 11, 2001 terrorist attacks were a factor in this, but not the only one. Today, religious associations, groups and individuals continue to support the Chechen cause as an act of giving Zakat (charity), one of the five pillars of Islam.

Turkish authorities, however, could not politically and openly take the "safe haven" position. Turkey had to increase its commercial and economic relations with Russia; Ankara is seeking to establish a privileged relationship with Moscow, particularly involving natural gas, and cannot allow the Chechen issue to weaken those efforts. Moreover, after September 11 and the start of the global war against terror, Turkish solidarity for Chechnya became difficult to sustain: the hosting of wounded Chechen fighters and arms transits (as was the case between 1994 and 1996, according to many observers and journalists) became hard to justify. Russia's information blockade of Chechnya also made it more difficult to aid the Chechens. It did not mean that the Turkish authorities did not know what was going on there, but it made it more difficult for them to make a convincing case that support from non-governmental associations or groups in Turkey would not be used for "terrorist" purposes.

However, it would be false to say that the moderate Islamist government of Turkish Prime Minister Recep Tayyip Erdogan has totally renounced his country's historical and geopolitical alliance with local Caucasian forces against Russia. Turkey is simply playing a two-level game. On the one hand, Turkey proves to Russia its good intentions by putting pressure on the Chechen Diaspora. On the other, it keeps open opportunities for Chechen resistance groups to act from its territory – for example, by collecting and transferring funds to the Chechen guerrillas. Using this strategy, Turkey retains a powerful tool in its ongoing negotiations with Russia on commercial and economic matters. Through the Chechen Diaspora, Ankara is able to obtain concessions from Moscow. Thus the Turkish government is willing to sacrifice one part of the Chechen Diaspora and allow another part to prosper and act in the interests of the Chechen guerrillas. Erdogan's government needs the Chechens: it needs to keep them active, but not too active.

Two examples illustrate this approach. In February 2004, Turkish Foreign Minister Abdulla Gül brought back from his visit to Moscow a list of 20 Chechens living in Turkey. Within months, several prominent Chechen rebels had either moved or relocated from their homes in Turkey. One of them, Zeindi Umarov, a former bodyguard of Aslan Maskhadov and a close collaborator of Umar Khanbiev, Maskhadov's general representative in Europe (including Turkey and South Caucasus), was resettled in Baku. At the same time, Alla Dudaeva, wife of the first Chechen president, Djokhar Dudaev, is still leaving peacefully in Istanbul; it seems that she is even protected by the Turkish authorities. More generally, some Chechen activists still find a welcoming shelter in Turkey. Zeindi Umarov was sacrificed so that others could stay.

Several days before the NATO summit in Turkey and the visit of President Vladimir Putin to Turkey in June 2004 and in December 2004, respectively, a dozen Chechen refugees from the refugee camps located on the outskirts of Istanbul were arrested by the Turkish special forces and charged with maintaining ties to Islamist groups, al-Qaeda in particular. (The arrests were confirmed by Chechen contacts in Istanbul and by Amnesty International, which provided the author of this article with a list of 12 names, all Chechens, arrested in June 2004.). All were released after the events and none of them had any effective links with international terrorist or Islamist networks. These arrests were only demonstrations of force by Turkish authorities, and probably also a kind of intimidation aimed at Chechens who might be tempted to go beyond the boundaries set by official structures in Turkey.

Playing the Chechen card as a negotiating tool assumes that all Chechen activities are under Turkish governmental control. Both of the above examples illustrate this two-level game. It could be dangerous if some Chechen groups were acting autonomously, outside the Turkish government's political strategy. Turkey lets some Chechens continue the war, but only under conditions imposed by the government in Ankara. That is why the Chechen Diaspora in Turkey is so tightly supervised. There is no political freedom for Chechen refugees, no chances for any Chechen political tendency to organize itself if the Turkish control structures do not allow it. The only political tendency that is unofficially accepted is the Maskhadov-related group. This has created a rift between the "Maskhadovites" and the "Dudaevists", who believe that Aslan Maskhadov, because of his moderation, has led Dudaev's legacy astray. This latter group cannot act freely. Rifts aside, the active part of the Chechen Diaspora in Turkey – including both fighters and emissaries collecting funds for them – continue to take advantage of their host's two-level game. And this, of course, does not go unnoticed by the Russians (see, for example "Turkish public organizations help Chechen separatists?", RIA Novosti, 5 November 2004).