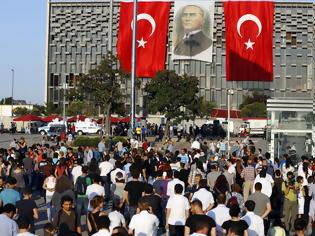 Earlier this month, two Al-Monitor contributors wondered how Turkey turned from the healthy man into the lonely man of Europe and the Middle East so quickly.

People stand facing the Ataturk Cultural Center during a protest at Taksim Square in Istanbul, June 18, 2013.

The answer lies in a favorite device of history buffs: counterfactuals. What if Alexander the Great had lived longer and expanded his domains further? What if the Chinese and not the Europeans had “discovered” the Americas? Exploring alternative directions in history equips us with a deeper understanding of the past and present.

Thus, our question: What if the government of Prime Minister Recep Tayyip Erdogan had acted differently at critical turning points in the past few years?

An investigation like this is apt to start with the Kurdish question — still Turkey’s most important obstacle in becoming a democratic country. For the past thirty years, the conflict between the militant Kurdish group the Kurdistan Workers Party (PKK) and Turkish security forces has claimed nearly 40,000 lives. The fighting has retarded the social, economic and political development of Turkey. What if Turkey had resolved the Kurdish question by now?

In fact, the country came very close to answering that question in 2009, when Erdogan announced the “Kurdish opening.”

Since then, however, Erdogan’s government has done very little to address the grievances of Turkish Kurds. Quite the contrary: instead of giving the “opening” substance and direction, Erdogan’s Justice and Development Party (AKP) has wobbled between two extremes: at times, the prime minister and his subordinates embraced Kurds as fellow Muslims. At other times, however, Erdogan catered to the basest forms of ultra-nationalism — going so far as to threaten to restore capital punishment — which would have been used against Abdullah Ocalan, the PKK’s imprisoned leader. Despite the recent lull and claims that the PKK would lay down its arms in the near future, the conflict could re-escalate any time.

That is most unfortunate, because with an autonomous Kurdish government in Northern Iraq and the likely formation of another one in northern Syria, a Turkey free from its Kurdish problem could have looked to its southern borders with greater self confidence.

Speaking of Syria, what if Erdogan and Foreign Minister Ahmet Davutoglu had played their hand more cautiously after cutting ties with the regime of President Bashar al-Assad in 2011? By not supporting armed rebels in Syria, the Erdogan government could have flaunted its role as a safe haven for nearly a half million Syrian refugees and stood on moral high ground. Along the way, Turkish border towns such as Reyhanli might have been spared from the violence.

A smarter approach to the Syrian conflict could have also helped Turkey’s relations with Iran. As Ankara began supporting the Free Syrian Army (as well as extremist groups such as Jabhat al-Nusra against Assad, it lost immense credibility in Tehran. Had Turkey not ganged up on Iran’s main regional ally to form a Sunni axis with Saudi Arabia and Qatar, Iran might not have felt the need to send a high-ranking commander from the Revolutionary Guard to Kandil Mountain in order to coax the PKK's acting leader, Murat Karayilan, to continue the fight against the Turkish government.

So what if there were greater trust in Turkish-Iranian relations? Much would be different, actually: Just as he had done in 2010, Erdogan could have mediated between the international community and Iran over the latter’s nuclear program. On a similar note, with the moderate Hassan Rouhani due to take over the presidency of Iran in a few days, Turkey could have acted as intermediary in a possible rapprochement between the United States and Iran.

Overall, a calmer and more nuanced approach to foreign events would have prevented a siege mentality from taking over Erdogan’s mind. Without so many external threats (real and imagined), the prime minister and his party might have reacted to the recent protests in Turkey with greater flexibility. (Of course, it would also be interesting to ask whether the protests would have gotten out of hand had Erdogan not not called the protestors “looters” or “rodents in the first place.)

With a less acrimonious home front, rather than demonizing the July 3 coup in Egypt for his own domestic purposes, Erdogan could have pursued two seemingly contradictory policies with ease: speaking out against the ouster of deposed president Mohammed Morsi as a matter of principle but also accepting Egypt’s political realities.

So what if Ankara had been more flexible toward the Egyptian uprising and coup in early July? Well, it would have continued to wield influence in Cairo while also reassuring its regional partners supporting the Egyptian coup that Turkish national interests and democratic proclivities are not mutually exclusive. And that would have truly set Turkey as a beacon of freedom, democracy and prosperity — something that Erdogan has long wished to see.

Of course, none of the above might have happened, anyway. Counterfactuals have their limits. After all, one cannot know what lay in the path untaken. But contemplating alternatives to learn the lessons of the past could help to correct one’s misguided actions. Let us hope that Erdogan and the AKP realize that fact sooner rather than later.

*Barın Kayaoglu, a visiting fellow in international security studies at Yale University, is finishing his doctorate in history at the University of Virginia.