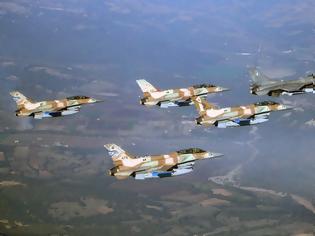 Turkish military ‘trying to provoke an incident’ with Israelis in Mediterranean

Greek and Israeli warplanes participate in an exercise

TEL AVIV — Turkey has been challenging Israel’s military throughout the Mediterranean.

Military sources said Turkey has used its Navy and Air Force to disrupt Israeli operations around the Mediterranean. They said the Turkish Air Force and Navy harassed Israeli warplanes during patrols and exercises over the last six months.

“They are trying to provoke an incident with us that could have strategic repercussions,” a source said.

The sources said the Turkish military was ordered by Prime Minister Recep Erdogan to disrupt Israeli operation near waters or air space claimed by Ankara, including those around the Republic of Cyprus. They said this has hampered recent exercises in the eastern Mediterranean with Greece, including one that took place earlier this month.

“The Turks view us as they do the Greeks, which means that the Turkish military flexes its muscles at every opportunity it gets,” the source said. “In the air, Turkish warplanes are playing a game of chicken with our forces.”

cooperation with Greece. They said the Israeli cooperation, which included

as a leading defense partner of the Jewish state. In November, Israel plans

particularly in NATO, when the opposite has taken place,” another source

said. “Israel has more military exchanges than ever with individual NATO

members while Ankara has been marginalized.”

directed through the United States, resulted in less aggressive behavior by

Over the last three years, Turkey has severed virtually all military