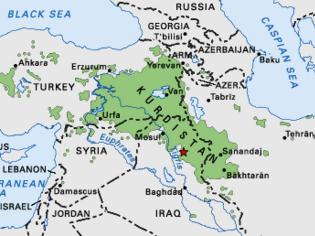 The Kurds occupy a region straddling the borders of Iran, Iraq, Syria and Turkey. While Kurds in northern Iraq have been relatively co-existing with other Iraqis, enjoying a degree of autonomy, and in Syria enjoying the protection of Assad along with Syria's other minority groups, the Kurds in Turkey have been fighting a decades long battle against the government who has pursued them within and beyond Turkey's borders. If Kurds are armed by the US, they will head to Ankara, not Damascus - thus Washington's latest threat was made toward Turkey, not Syria.Kurdish groups have thus far stayed out of NATO's destabilization of Syria, US threats to arm and unleash Kurdish groups aims at coaxing Turkey to act

The violence in Syria has been predominantly carried out by extremist groups, tied to Al Qaeda, and organized, funded, staged, and armed by the United States, Israel, and Saudi Arabia, with Lebanon's Hariri faction playing a major supporting role. Starting as early as 2007, it was reported that Syria's notoriously violent Muslim Brotherhood was already receiving support from the West to begin undermining Syria as part of a grander strategy to break the Iranian-Syrian-Hezbollah sphere of influence across the region.

The Kurds, occupying territory straddling the Iranian, Iraqi, Syrian, and Turkish borders, have for nearly as long, been fighting against Turkish forces, with US-occupied Iraq hosting several Turkish invasionsaimed at crushing alleged Kurdish strongholds. Unlike Syria's battle against admittedly foreign-funded and armed militants, many of whom are not even Syrian, the "international community" has been mute over Turkey's military campaigns against Kurds both within and beyond its borders. And even throughout the duration of Syria's current unrest, Turkey has continued conducting military operations against the Kurds.

Syria's Kurdish population has remained neutral, as have most of Syria's minority groups - fearing Libya-style consequences of allowing heavily armed, foreign-backed extremists to overrun their nation and either impose draconian restrictions upon them, or uproot and/or exterminate them all together, as the people of Libya's Tawargha have experienced. So then, Washington's latest move, in addition to openly admitting they are facilitating the arming of Syria's opposition in the midst of a UN brokered "ceasefire," to invite "Kurds" from Syria for talks about arming and deploying them against President Bashar al-Assad, seems a very unlikely scenario. Indeed, Washington may very well arm Syria's Kurds, but the direction they will ultimately go will be Ankara, not Damascus.

And even if Syria's Kurds decided to rise up against the Syrian government for Western interests first, just as is happening in Libya, the weapons, cash, and support they use to do it with will inevitably end up being used against Turkey in the near future. In Libya, arms from NATO have already trickled into the Libyan Islamic Fighting Group's (LIFG) affiliates across Al Qaeda in the Islamic Maghreb (AQIM), and eveninto the hands of Nigeria's Boko Haram.

Published by corporate-financier funded US policy think-tank, the Carnegie Endowment for International Peace, "The Syrian Dilemma: Turkey's Response to the Crisis," notes that Turkey is the ideal proxy for the West to carry forth its agenda, but also recognizes the quandary faced by Turkey. Turkey could not credibly intervene in Syria on "humanitarian grounds" while carrying out similar military campaigns within its own borders against the Kurds, and any incursion into Syria by Turkey could lead to a backlash from the Kurdish community across the region.

Turkey, which has been selected by US foreign policy think-tanks to create "safe havens" within Syria for NATO's proxy forces, has yet to materialize any concrete plan of action. It may be that Turkey has decided against what is ultimately the first phase of a greater war against Iran, and in turn Russia and China. The US using Turkey as a proxy, will fight its enemies to the last Turk, after bleeding its own soldiers dry and bankrupting its taxpayers in Iraq and Afghanistan. Turkey's hesitation, in Washington's eyes, after the offering of several unpalatable carrots, seems to be now incurring the stick. If Turkey needed any more reasons to abandon a pro-Wall Street-London stance, this latest provocation by Washington should be it.

It is unlikely the West will have any success in triggering a Kurdish uprising in Syria. If Turkey assists the Syrian government in restoring order within its borders, it is also unlikely that any attempt by the West to arm the Kurds as a punitive action against Turkey will gain any traction. However, if Turkey assists the West in destabilizing, dividing, and destroying Syria, a lawless Libya-style staging ground for militant activities in all directions, including Ankara, will result. And if Libya's "post-revolution" dystopia can serve as a warning to Turkey against advancing the West's agenda, "pre-revolution" Libya where the West feigned rapprochement with Muammar Qaddafi before ultimately betraying him can serve as warning against Turkey for believing it serves as anything more than a lever with which the West seeks to use to advance its own exclusively beneficial interests.
Πηγή
InfoGnomon
ΦΩΤΟΓΡΑΦΙΕΣ