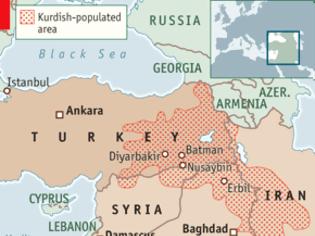 Turkey and the KurdsRebellious daysA fresh wave of protests shows how far Turkey is from pacifying its KurdsMar 24th 2012 | DIYARBAKIR AND NUSAYBIN | from the print edition“FROM here on we must stop serving in the Turkish army, paying taxes and using the Turkish language. A new phase has begun.” The call for defiance came from Murat Karayilan, the top field commander of the rebel Kurdistan Workers’ Party (PKK). He issued it after another spate of bloody clashes in the predominantly Kurdish south-east.The unrest was sparked on March 18th when, in defiance of a government ban, tens of thousands of Kurds massed in the streets of Istanbul and Diyarbakir to celebrate the Kurdish new year (Nowruz). One Kurdish politician and a Turkish policeman died, hundreds of Kurds were arrested and many others were wounded as riot police, backed by helicopters and armoured personnel-carriers fired tear gas to disperse the crowds. In Batman, Ahmet Turk, a revered Kurdish politician and a heart patient, was punched in the face by a policeman and taken to hospital. “Was it a holiday or a war? I couldn’t tell,” said Arif Arslan, who runs Batman Cagdas, a daily newspaper.

In this sectionMonti’s labour-law tangleMurders in the Midi-PyrénéesSalami tacticsTesting the limitsCracking down, cracking up»Rebellious daysUnfree tradeReprintsRelated topicsTurkeyKurdistan Workers' PartyPoliticsRecep Tayyip ErdoganGovernment and politicsRecep Tayyip Erdogan, the Turkish prime minister, blamed the Kurdish Peace and Democracy Party (BDP). It picked a fight, he claimed, by ignoring government orders to celebrate Nowruz on its official date, March 21st. The BDP retorted that last year the government let it move the celebrations to the weekend, enabling more Kurds to attend—so why not this time?Until last summer Mr Erdogan’s Justice and Development (AK) party had been holding secret talks with the PKK in Oslo and with its imprisoned leader, Abdullah Ocalan. The so-called “Kurdish opening”, which saw the inauguration of Turkey’s first state-run Kurdish- language TV station, was meant to be crowned with a deal ending the PKK’s 28-year-long rebellion. Despite a wave of anti-PKK sweeps that landed thousands of Kurds in jail, AK won half the votes in the south-east in the June 2011 general election. Yet far from using this mandate to push ahead with reforms, the government has gone the other way, pounding PKK bases in Kurdish-controlled northern Iraq and arresting thousands more Kurds on thinly supported charges that they are “terrorists”. Elected mayors, fire chiefs, doctors and even tea boys have all been locked up.“The number of detentions doubled last year, and torture and sexual harassment of prisoners is on the rise,” says Raci Bilici, acting chairman of the south-eastern chapter of Turkey’s Human Rights Association. His predecessor has been in jail since 2009. The association’s offices have been repeatedly raided and its files seized.Mr Bilici says the government’s new tactic is to coerce Kurdish youths into becoming agents. Botan Cankurt, a 19-year-old bus steward who is now in prison facing terrorism charges, told a court in Diyarbakir last month that he had been trained by the police to make Molotov cocktails and to organise anti-government demonstrations. Tekosin Bulca, a fellow suspect, said that she had been recruited to seduce BDP members and report on their activities. Seyma Urper, a defence lawyer, claims that “the idea is to use these children to provoke violence against the security forces allowing the latter in turn to justify their arrests…it is another way of dividing and weakening the Kurds.”The government’s broader strategy appears to be to beat the Kurds into submission before drafting a new democratic constitution that Mr Erdogan has long been promising to produce. Yet there is also talk of introducing optional Kurdish-language classes in government schools. One of Mr Erdogan’s strengths is his knack for pulling back from the brink. Some of his supporters suggest that a fresh round of peace talks and reforms may be in the works.Sadly, the crackdown on Kurdish nationalists has bolstered the BDP’s overblown claims that AK was insincere from the beginning. Indeed, although Mr Erdogan insists that it is all the PKK’s fault for escalating its attacks last summer, “It is becoming increasingly difficult to defend AK,” contends Sahismail Bedirhanoglu, chairman of the South-eastern Businessmen and Industrialists Association in Diyarbakir. “Bonds between Turks and Kurds have never been this stretched, we are near the breaking point.”A bigger risk lurks in Syria, which is home to an estimated 2m Kurds. Syrian Kurds are believed to make up as much as a third of the PKK’s fighting force. The now irreversible breach between Mr Erdogan and Syria’s president, Bashar Assad, may have revived Mr Assad’s friendship with the PKK. Growing discord between Iraq’s Kurds in Erbil and the Shia-led central government in Baghdad is another worry. “Sooner or later, an independent Kurdistan is bound to emerge,” says a senior Western diplomat. Either way, Turkey needs to offer its own Kurds a better deal. InfoGnomon
ΜΟΙΡΑΣΤΕΙΤΕ
Tweet
ΔΕΙΤΕ ΑΚΟΜΑ