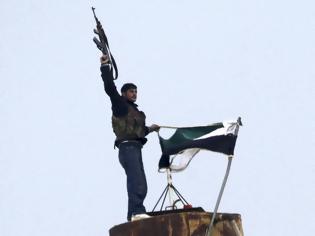 A member of the Free Syrian Army fires his weapon after lowering a Syrian flag and raising a Syrian opposition flag, as gunfire is heard between them and the armed Kurds of The Kurdish Democratic Union Party (PYD) in the northern Syrian town of Ras al-Ain, Nov. 25, 2012. (photo by REUTERS/Amr Abdallah Dalsh)

The Kurds are facing serious dangers in many of the countries they live in. The Kurdish issue in Turkey may be the oldest but the Kurdish movement in Iraq was the first to score a historic achievement in having Kurdish identity recognized and a putative state — awaiting only official announcement — established.

In an interview with Mohammad Noureddine, Kurdish Democratic Union (PYD) chief Salih Muslim Muhammad said that Turkey is undermining the PYD's role in the Syrian opposition and is plotting to establish a 10 km-wide [6.2 mile] buffer zone inside Syria.

The Leader of the Syrian Kurdish Democratic Union Party to As-Safir: We Want Autonomy While Turkey Wants a Buffer Zone Under its Control

In Syria, during the so-called Qamishli uprising a few years ago, the Kurdish movement was weak and ineffective mainly because Kurds in Syria number only 1.5 million to 2 million and are not located in a homogeneous area as they are in Iraq and Turkey. In Syria, Kurdish areas include Arabs and Turkmen.

In an interview with As-Safir, Salih Muslim Muhammad, the leader of the Syrian Kurdish Democratic Union Party (PYD), which controls several Kurdish cities in northern Syria, said that the past decades’ “Arabization” policy — which is the same policy practiced by Baghdad toward Northern Iraq for decades — has altered the Kurdish region’s demography.

But the Syrian crisis has refocused attention on the Kurdish role in Syria and on how much it could impact the course of events. An important game-changer happened in the second half of July 2012, when PYD fighters suddenly appeared in the media raising Kurdish flags and pictures of PKK leader Abdullah Ocalan. The Kurdish era in Syria had begun.

Remarkably, the first reaction came from Turkey, which threatened to enter Syria and prevent the emergence of a threat to Turkish national security, according to Turkish officials. That was the first time Turkey made such a threat since the start of the Syrian crisis and it indicated that a new factor had entered the Syrian and regional equation.

Damascus immediately accused Ankara of colluding with the PYD to deploy Kurdish forces in Syria. But Muhammad denies any link between the PYD and the PKK, which are two separate organizations, even though the PYD agrees with PKK ideology.

Muhammad said that Turkey is the root of the problem. He said that the Turks have put a red line on his party’s participation in the SNC and then in the National Coalition for Syrian Revolutionary and Opposition Forces (NCR), which was formed in Doha. According to Muhammad, the NCR was a Western attempt to reduce Turkey’s influence because it failed to accomplish what Washington asked it to do in the Middle East, notably spreading moderate Islam. The region is not teeming with fundamentalist organizations.

Muhammad talked about the battles that have been going on for weeks near the Turkish border in Ras al-Ain. He said that these battles are part of a Turkish strategy to occupy Western Kurdistan (which is in Syria) by using Turkey-trained Syrian opposition fighters who use the Turkish city of Gilan Pinar as a jumping off point.

Muhammad said that Ras al-Ain is important for Turkey because it is located on the Turkish border and its fall will trigger a domino effect leading to the fall of “Syrian Kurdistan.” He said that Turkey is trying to bring down one Kurdish area after the other for strategic reasons. The Turks wish to form inside Syria a 10 km-wide [6.2 mile] buffer zone that Turkey will control. He said that the only way to stop that project is for the Kurds to defend themselves and for the Syrian crisis to quickly end.

Muhammad seemed confident that the scheme will not work because the Kurds are determined to defend themselves and will transform the area into a graveyard for the Turks and their allies. He criticized the head of the Kurdistan region, Massoud Barzani, who has never stopped fighting PKK ideology. Muhammad said that Barzani, under pressure from Turkey, is trying to control the Kurdish region in Syria and that Barzani has only recently decided to set up a humanitarian corridor between northern Iraq and Syria.

Muhammad thinks that Barzani’s alliance with Turkey is aimed at weakening the PYD. Muhammad is not optimistic about the outcome of the negotiations between Ocalan and the Turkish state because the Justice and Development Party and Turkish Prime Minister Recep Tayyip Erdogan are of the mindset that rejects the other. Erdogan wants to use these negotiations only to buy time and manipulate the Kurdish issue, while betting that NATO will not allow the partitioning of Turkey.

Muhammad thinks that the main reason Turkey has not yet militarily intervened in Syria is because Turkey is part of NATO and any attack by Turkey will be faced by Russia on the basis that it is an attack by NATO. As for why there has not yet been an outside military intervention in Syria, it is because the West and Israel fear the Syrian reaction, especially after Syria has loaded chemical warheads on missiles that are ready to launch at any moment and that can reach anywhere in Israel.

Muhammad said that the vetoes placed on the PYD by some Arab powers, and even by some Kurdish powers in northern Iraq, are basically due to pressure from Turkey. He said that since the PYD is part of the NCC, the party supports a peaceful and democratic change in Syria without foreign intervention. He said that the party believes that any dialogue conference or settlement agreement in Syria should be given international and regional guarantees in order for it to be properly implemented, otherwise any agreement with the regime would be meaningless.

Muhammad said that Syrian Kurds seek a formula that would allow them to express themselves in freedom and dignity. He said that such a goal can be achieved by establishing an autonomous region, regardless of what it is called, be it a federation, self-rule, or self-administered region. What is important is for the constitution to recognize Kurdish identity, that cultural identity be prominent in schools, universities and media, and that the Kurds be allowed to have their own police force to defend themselves, without that being considered a separate army. Muhammad does not want the autonomous region to have clear boundaries, unlike the situation in Iraq.